New Uses for Diamond Drilling in the Construction Industry 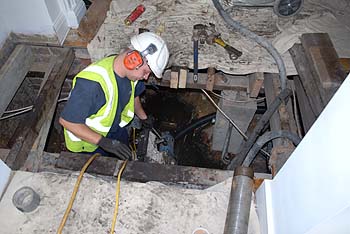 Traditionally, diamond drilling has been used in the construction industry to form different size holes and openings in concrete and brickwork structures.

The process is considered an accurate and cost-effective alternative to cruder techniques such as bursting which often require reinstatement work after any openings are formed. The diamond drilling of smaller size holes, from 6 mm diameter, allows anchor bolts and dowel bars to be attached to structures. Larger holes, up to 1200 mm in diameter, provide cavities to allow the insertion of utility pipes and temporary support frames into structures.

Diamond drilling techniques and equipment are now being used for more challenging tasks within the construction sector. Often these unconventional applications are borne from particularly difficult jobs where no alternative equipment or technique is available.

A good example is the use of continuous drilling through soil and clay as well as concrete and brick to form ducting tunnels.

Working just outside of London, in Royal Windsor, we were asked to apply our diamond drilling expertise to establish two ducting tunnels beneath the foundations of a terraced house. A recent extension had meant the original breathing holes, which naturally ventilated the sub-floor spaces in the property, had been covered resulting in rising damp.

We decided to use a new application of continuous drilling. This is traditionally used to drill through concrete and brickwork, with the mining barrel continuously extended as it drills to ensure the hole does not collapse. Once complete, a solid plastic sleeve is inserted along the length of the barrel prior to its removal.

In this project, we drilled two, 7 metre long, holes 1 metre beneath ground level to bore from the sub-floor space in the house, beneath the concrete slab of the new extension to an opening outside. We then applied an innovative solution to the removal of the cored waste. This traditionally takes the form of solid concrete tubes, but with the mining barrel boring through earth, the soil waste generated was sucked back through the barrel with an industrial vacuum.

A Flexible and Cost-effective Solution to Unusual Problems...

The success of this demonstrates that diamond drilling in the hands of specialist diamond drilling companies such as Castle and Pryor can be a flexible and cost-effective solution to unusual problems within the construction industry.