Endless Runways: The Future of Air Travel or a Never Ending Story?

By Mark Castle | August 20, 2018
Will future generations be jetting-off in circles? Our love-affair with air travel grows stronger by the year. And with forecasts predicting continued industry growth until 2050, our airports will have to expand or adapt to survive. Could a new kind of runway be the answer?
"If someone one hundred years ago would have said that we would be transporting as many passengers in aircraft as we would in trains, people may have thought, "a steam engine would never fit in an aircraft made of wood and ropes"
Henk Hesselink

In 2017, Dutch engineer, Henk Hesselink revealed his revolutionary airport runway design to the masses. When the ‘endless runway’ concept was featured on BBC’s World Hacks it sparked outrage on social media and has since divided aviation industry experts.

So, what’s going on here? As a licensed infrastructure contractor for both London Heathrow and Gatwick Airport, this news has us wondering… Could we be cutting concrete and joint sealing on a new breed of circular runway?

What is a circular runway?

Circular or continuous runway designs aren’t brand new. In fact, the NLR has been working on Hesselink’s concept since 2012.

The circular runway is three times the length of your average straight runway, coming in at 10 km long with a diameter of 3.5 km. The banked sides that slope down to the centre of the circle are designed to take advantage of centrifugal forces, slowing down aircraft as they land. During takeoff, the idea is that aircraft will move outwards naturally on the runway as they accelerate.

What’s the logic behind circular runways?

According to Hesselink, the driving force behind developing his idea was to minimise crosswind during takeoff and landing. On a straight runway, aircraft can only takeoff or land in a fixed direction. There’s no room to avoid crosswinds which can cause delays during high winds and stormy weather.

He argues that, on a circular runway, aircraft would be able to take off and land on a point of the circle where there is no crosswind. Making for safer and smoother take offs and landings. Multiple aircraft could also takeoff and land at different points on the runway, simultaneously.

Why are we exploring circular runways?

In Dougal Shaw’s documentary piece for the BBC, aired in March 2017, Hesselink argues that his circular runway concept has the potential to:

Up to three planes will be able to use the runway at one time, we’ll have the freedom to fly in different directions, airports will be less congested and will require less space to construct. 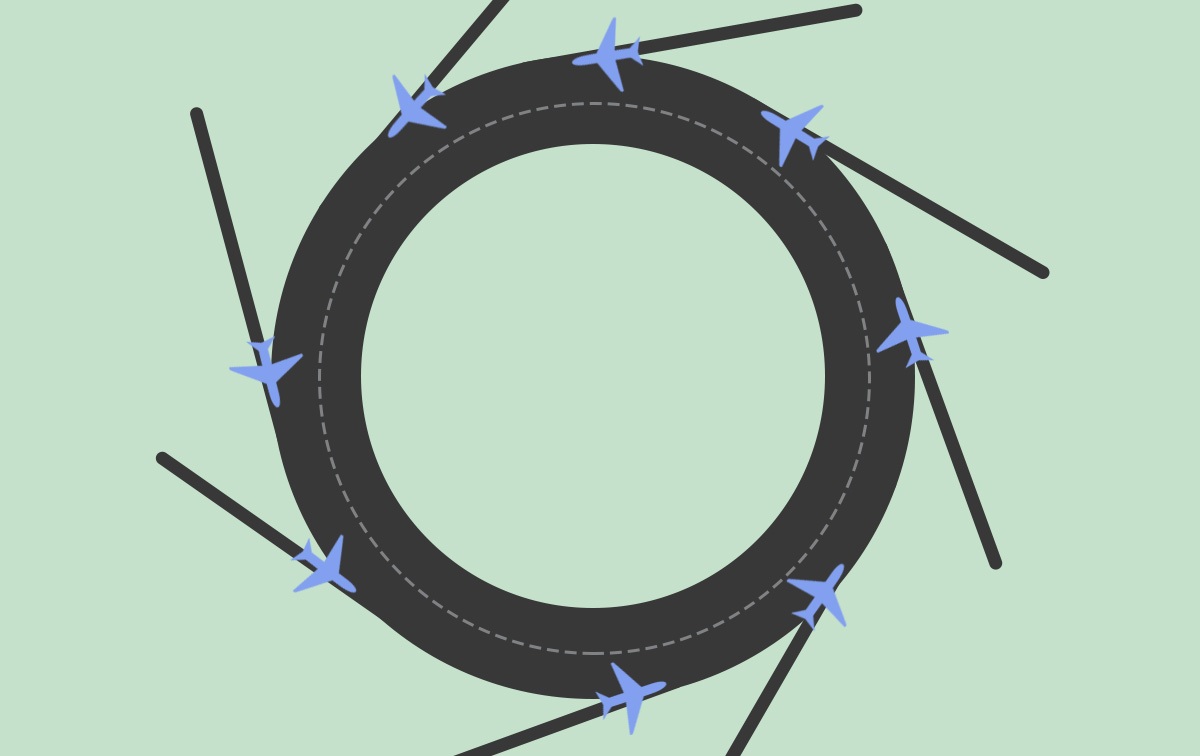 What’s the problem with circular runways?

But aside from some military tests during the 1960s, the circular runway concept remains untested. Following the BBC film in 2017, the debate exploded and attracted backlash from experts in the aviation community.

Here are a few of the most worrying objections.

The 5 Most Concerning Objections to Circular Runways

The possibility of engine failure is a real threat during takeoff. If one engine fails, the aircraft will naturally turn toward the failed engine. On a straight runway, the pilot can usually abort takeoff, safely. But on the circular runway where two or even three planes could be using the runway at any one time, a failed takeoff could be fatal.

When planning airfield construction, the suitability of the area around the runway must be carefully considered. For example, the runway must be placed in an area where no obstacles, buildings or mountains are going to interfere with flight path. With this in mind, we’d have to find an extremely flat and possibly remote area to account for the extra clearance area required by a circular runway.

3. Circular runways will be more expensive to build

Circular runway airports may boast a mere 3.5 km diameter but the wider runways will take more concrete to build. Runway construction and airfield maintenance will also be more complex due to the precise angle of the runway surface.

Experts estimate that building a new airport with a circular runway will cost around 1.5 times that of a traditional airport.

And that’s before the cost of tunnelling beneath the runway. Because the entire airport will be situated within the inner circle, surrounded by the runway itself, all airport services and transport links will be forced to access the airport from below. Underground access for cars, taxis, buses and trains must all be factored into the price.

4. Standing up to real-world wind conditions

In the real world, only a small section of the circular runway would offer optimal headwind and minimal crosswinds. To land upwind, pilots would need to land on a precise point on the circle or again, face landing in the same crosswinds that the circular runway is trying to avoid. In that case, we’d be dealing with the same problems we have with straight runways.

In perfect conditions, the concept works. But bring stormy conditions or even a windy day into the mix and you can see how we could be going round in circles.

The circular runway is 3.5 km in diameter. The entire airport must fit inside the inner part of the circle - without exception.

This is where the ‘circular airport’s smaller footprint starts looking like a disadvantage. The airport will be permanently constrained to the area inside the circle, preventing any substantial expansion in the future.

Could we really see circular runways in the capital, by 2050?

We don’t think so. Here’s the problem.

The circular runway was conceptualised to allow aircraft to take off and land from any direction. A great idea when you’re the only airport in the area but when you have 4 other neighbours to contend with, the concept starts to crack.

In London, we have five airports (six, if you count Southend) operating within one area. If even one introduced a circular runway and gave its airlines the freedom to take off and land in different directions depending on wind conditions - this would have a knock-on effect on all the neighbouring airports. In real terms, it’s just not practical in a multi-airport city like London.

Hesselink continues to defend his concept and this year, the NLR announced plans to test the concept with fixed-tip delivery drones. So maybe in 50 years time, we’ll be kicking ourselves. But until then, we’re confident that we’ll be carrying out airfield repairs on the straight and narrow - for now.

Need a reliable contractor for your airfield? We’re licensed infrastructure contractors in London serving the UK’s busiest airports. Our highly trained team are diamond drilling experts and we can also deliver reliable joint sealing and concrete patch repair. Get in touch with us today for a competitive quote.