Diamond drilling and sawing specialist Castle and Pryor Ltd completed a specialist diamond sawing task relating to the reconstruction of the Temple of Mithras in the City of London. Work on the reconstructed Roman temple centred on delicately extracting the antique stone and tile previously bonded together with cement mortar during the 1960s. The undertaking was part of a project to return the Third Century structure to its original location on Walbrook.

The temple was originally uncovered by archaeologist WF Grimes in 1954 during site preparation works for a new development at the site. The find included the marble head of the god of Mithras and several other significant artefacts which are on display in the Museum of London's Roman gallery. Following its discovery, the temple was dismantled and placed into storage until 1962 when it was reassembled on a podium ninety metres away from where it was first discovered. 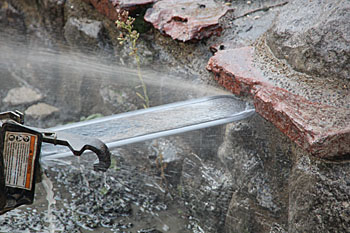 In 2007 listed building consent was granted to dismantle, store and ultimately re-house the temple in its original position. Relocating the temple will facilitate its displayed in a purpose built, publicly accessible facility located within the new office development.

Key to dismantling the temple was removing the cement mortar that had been used to bond the structure's stones and tiles together in the 1960s. Castle and Pryor deployed a specialist team of operatives to surgically slice through the mortar with specialised concrete-cutting diamond chain saws. Working in two separate teams, the operatives were able to isolate individual bricks and slates therefore allowing them to be removed by stonemasons.

The entire undertaking was carried out over a period of two weeks and four days with other operations relating to the site's re-development such as demolition and excavation continuing alongside the work.

Commenting on the unusual project, Castle and Pryor Director Graham Pryor said, “This was a challenging job because we had to saw in between the components of a structure that contained fabric nearly one thousand, eight hundred years old. Not only did the task require our operatives to have high levels of skill and experience but also a steady hand too. The use of hydraulically driven, concrete-cutting chain saws allowed for accurate and expeditious sawing during the project which meant none of the temple's Roman tiles or stones were damaged and the site's redevelopment could continue unaffected by the project"