Castle & Pryor Take To The Sky 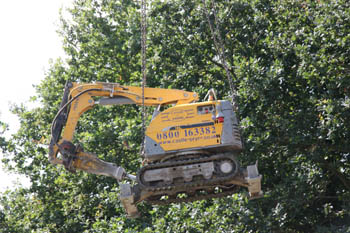 Controlled demolition and concrete cutting specialist Castle and Pryor has recently assisted with the demolition of a defunct water tower in East Sussex. The project involved lifting one of the company's Brokk remote controlled demolition robots into the air so that it could access and demolish the top portion of the structure. 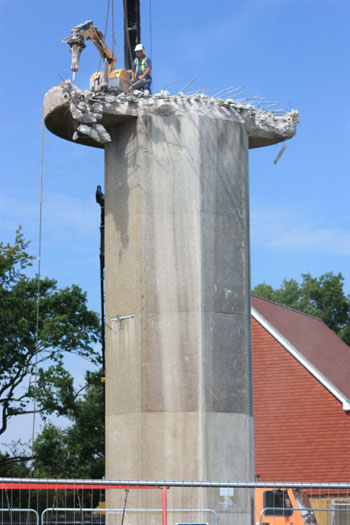 The unconventional approach to demolishing the water tower was due to its location. With a busy A-road on one side of the building and residential dwellings on the other, it was deemed safest to surgically remove the top portion of the tower using a Brokk robot and then fell the remaining section with a conventional demolition excavator.

With the aid of a Tadano mobile crane, Castle and Pryor's Brokk 180 was initially suspended above the tower's water tank. From this position the machine utilised its hydraulic hammer attachment to break out the roof and side walls of the structure. The two tonne Brokk was then placed on top of the structure in order that it could demolish the remaining sections of the water tank which were still protruded for the tower. During the process, Castle and Pryor's operative was able to operate the machine remotely with the assistance of a telescopic access platform erected nearby.

In total, the Brokk machine spent ten days demolishing the water tower's tank, reducing the twenty metre-high structure by five metres. By removing the building's top-heavy tank, more conventional techniques were applied to the remaining structure with a forty tonne excavator utilised to level the tower and make good the site ready for a future housing development.

Commenting on Castle and Pryor's latest project, Graham Pryor said, “We are regularly called upon to deploy our remote controlled robots on challenging applications in unusual locations such as airports, railways and power stations. Providing a safe, cost effective means to remove the top portion of the water tower is a good example of this. A large fleet of Brokks and many years experience operating them means we are well-versed at finding solutions to the construction industry's problems".