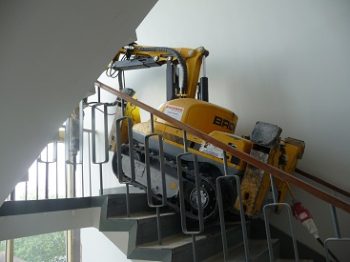 Castle and Pryor, a controlled demolition company, were approached by Whitestone properties on behalf of their client Crestel Partnerships to carry out some Brokk demolition work on a project at Crown House, which was originally built and used as an office in the centre of Crawley, West Sussex.

Crawley is the main conurbation to London's Gatwick airport and Castle and Pryor were commissioned to remove the staircases as part of the conversion project to create extra space within the stairwells of the building for several centrally located apartments. The Crown building is a 4 storied building with staircases at either end comprising of reinforced concrete.

Paul Coombs, Managing Director of Whitestone Properties states 'We are very impressed with the work that Castle & Pryor completed, it was finished on time and to budget regardless of the difficulties of the weather and the open nature of the stairwell. They overcame the challenges presented to them and we look forward to working with them on projects that may come up in the future'

The removal of the single set of stairs required a well thoughtout controlled demolition methodology so as not to compromise the integrity of the remaining structure whilst working within a confined space with restricted access for the equipment and operatives alike.

To overcome the aforementioned problems a robotic Brokk 100 was deployed to carry out the task as ergonomically it could work within the tight confines of the structure and have the necessary power to disseminate the reinforced concrete stairs efficiently and safely whilst eliminating all aspects of HAV often associated with this type of activity.

Whilst the works were in progress the weather took a turn for the worse and heavy rainfall penetrated the demolition zone via old window openings which had been removed prior to demolition works commencing. This situation led to the floors becoming wet and slippery leaving an unsafe working environment. To overcome the problem anti-slip matting was mechanically fixed upon the surface of the concrete so that the Brokk 100 machine and operatives maintained adequate traction to fulfil the works in a timely and safe manner.

All materials were disposed of by Whitestone Properties and all equipment was maintained under environmental regulations of local requirements.

Project was on budget.

The project was estimated to take 6 days over a 3 month period and all works were completed on time.